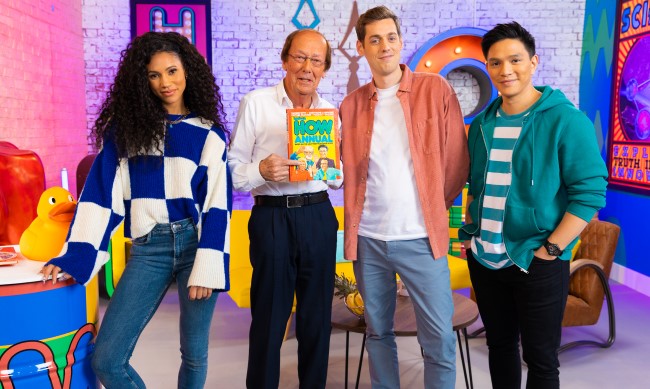 Series two of the rebooted popular children’s TV series which began more than 50 years ago and returned to screens in 2020 presented by Vick Hope, Sam Homewood and Frankie Vu.

The three new hosts are joined by legendary broadcaster and original presenter Fred Dinenage (who has appeared in all 418 episodes) to share more helpful life hacks, surprising science and fascinating facts.

Terrific Television’s Head of Production Katie Oakley said: “The Bottle Yard has always made us feel welcome. Relocating to Bristol in 2021 for the filming of The Makery was daunting, but Kat, Emma and the Studios team made the transition smooth and we felt at home instantly. So much so that we went back a few months later to film another of our shows, HOW.”

“We became aware that The Bottle Yard is committed to creating opportunities for industry newcomers. We connected with one of their runners who filmed with us in the Winter and who we’ve already invited back for when we return. It’s great to see the Studios working with productions to create experiences for those starting out in their careers.

“The Studios are also great at being ‘green’, which really helps with gaining albert sustainable production accreditation. And there’s no better place to be during a pandemic, their operations have been reassuringly COVID-safe.”

20 x 25-minute episodes were filmed at at The Bottle Yard Studios in January and February 2022.