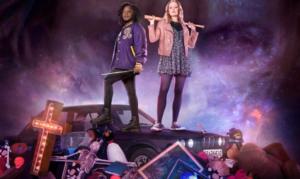 Comedy horror starring Cara Theobold and Susan Wokoma, from the BAFTA award-winning creator of Misfits, following the fortunes of an unlikely duo of demon hunters.

Bespoke sets were built in Tank House 2 and our Green Screen Studio, and props were stored on site. Filming for the six part series took place over 14 weeks at the Studios and across the city in summer 2016.