Poldark finale begins 14 July, bringing to a close 5 years of production at The Bottle Yard

The fifth and final series of BBC One’s epic Cornish saga Poldark begins this Sunday (14 July), marking the end of half a decade of production at The Bottle Yard Studios and filming at Bristol locations with support from Bristol Film Office.

Producers Mammoth Screen have based at The Bottle Yard since Poldark’s first series filmed in 2014, building major interior sets at the Studios whilst basing production offices and its extensive costume, construction and prop departments on site. The final eight-part series began filming in Cornwall, Bristol and the West Country in September 2018 before moving to shoot interiors at The Bottle Yard. Filming wrapped on 1 February 2019. 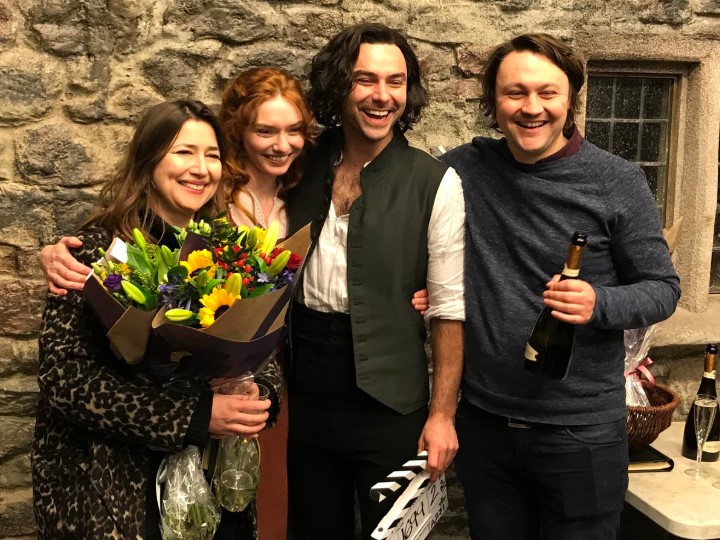 With each new series, Poldark’s ‘studio footprint’ at The Bottle Yard has grown. By series five, Studios housed a total of 18 sets standing across three of its biggest spaces. These included interiors for four key houses – Poldark’s home in Cornwall (Nampara) and London lodgings, the Warleggans’ homes in Cornwall and London – as well as the Red Lion Pub, Sawle Kiddley and an impressive period scale replica of the House of Commons. In addition to the Cornish locations that Poldark has become synonymous with, a host of Bristol locations will also feature in the final series.

Michael Ray, Producer of Poldark, says: “The Bottle Yard Studios has been more than our Bristol base for 5 years, it has been our home. Providing multiple studio spaces, it has allowed the show to keep growing as Ross tackles greater challenges in his fight for a better world. The foundation it provided gave us the ability to shoot extensively in Cornwall and reach out to the great many locations around Bristol including the Poldark ancestral home at Chavenage, the mine interior of Redcliffe Caves, Colston Hall’s many subterranean worlds and Bristol Old Vic, which has a starring role in the series five opening episode. It has been a fantastic five years and we are extremely grateful to everyone at The Bottle Yard Studios and Bristol Film Office for all their care and support.”

Fiona Francombe, Site Director of The Bottle Yard Studios, said: “It’s been an absolute honour to have been Poldark’s studio home for its entire run. The professionalism of the cast and crew has made this a truly enjoyable period, and the team’s focus on sustainable production has been applaudable and inspiring. We celebrate Mammoth’s efforts to lead the way in reducing the carbon footprint of TV production. Poldark is a landmark series that viewers will remember for years to come, and it’s been a joy to have helped Mammoth realise their ambitions here. We look forward to welcoming them back for new projects in the future.”

Bristol Film Office’s Natalie Moore says: “Poldark has been an important part of the production profile of Bristol for the past half-decade and it’s wonderful to have seen so many skilled Bristol crew members playing a crucial role in the making of this each series. This series will see more Bristol locations featured than ever, which is a great way to mark the end of this chapter. We look forward to supporting Mammoth Screen with future projects.”

It’s estimated that approximately 13 tonnes of carbon is emitted in the making of one hour of TV. Mammoth Screen is a champion of BAFTA’s albert sustainability initiative and used sustainable production methods on Poldark such as LED lights and using local crew, to achieve a three-star albert rating for series four. The production has gone on to reduce its carbon footprint by a further 10% for series five.

Helen Bater, Poldark’s Production Manager says: “There’s a wealth of talented crew in Bristol and the surrounding region that we’ve been fortunate enough to work with. Booking crew in such a way not only boosts local economies, it also brings down the cost and environmental impact of travel and accommodation. In series five, 88% of the main and daily crew were local bookings. Finding the right supplier has also been key to keeping environmental impact low. Being able to use companies based at The Bottle Yard has significantly helped. Having such a variety of services to hand is a real bonus for any production, for the obvious reason that they’re right on our doorstep, but also because the Studios has a strong green policy that the tenants share.”

“We’ve also been careful to strike our sets at The Bottle Yard as sustainably as possible to avoid sending materials to landfill. Much of the wood has been passed on to other productions, and sets made from other materials, such as the mine interior which was crafted out of moulded polystyrene, were carefully dismantled and passed back to the set repurposing company Dres’d. We also donated household items from our crew’s accommodation such as pillows and duvets to homeless shelters in Bristol.”

And it’s been revealed that the show’s actors also took their favourite mementos from sets at The Bottle Yard home with them. Aidan Turner says: “I sent a text to Karen Thrussell, our executive producer, asking if I could possibly have the kitchen table and benches from Nampara as it is this beautiful, vintage French table and they said yes, so I am very excited to put them in my house. That will be a cool memento because it was at the middle of all of the big scenes we had in Nampara and where a lot of things went down. Obviously I am also taking the tricorn hat…”

It is a new century and with it comes the promise of a hopeful future, but the past casts a long shadow over Cornwall. Following the death of Elizabeth, Ross Poldark (Aidan Turner) resolves to put Westminster behind him and spend more time with the people he loves. However, when an old friend needs help, Ross is compelled to challenge the establishment and question his own loyalties to king and country. As the Enyses (Luke Norris and Gabriella Wilde) rally to join the cause, Demelza (Eleanor Tomlinson) must contend with dangers close to home, while George (Jack Farthing) courts corrupt powers whose influence spans the Empire.

Poldark’s final series begins on Sunday 14th July at 9pm on BBC One.