We’re glowing with pride here at The Bottle Yard Studios, as our Site Director Fiona Francombe has been awarded an Honorary Degree of Doctor of Arts by University of the West of England (UWE Bristol) in recognition of her “exceptional contribution to film and TV production”.

Fiona received the honour at a summer graduation ceremony at Bristol Cathedral on Tuesday 23 July, alongside other Honorary Degree recipients from fields of architecture, engineering, sustainability and inclusivity.

Vice-Chancellor of UWE Bristol, Professor Steve West said: “We are extremely proud to be conferring Honorary Degrees on these exceptional individuals. [They have] demonstrated true leadership, skill and visionary thinking to make an incredible and lasting impact in their areas of work, and I know that they will inspire and encourage our graduates as they take their first steps into their chosen careers.”

Mayor of Bristol Marvin Rees said: “I’m delighted to see one of Bristol’s local stars honoured for her contribution to the local film and culture sectors. Fiona’s work has ensured that The Bottle Yard Studios has established itself amongst the film and TV industry as a top-class facility that attracts major productions on a continuing basis and has contributed greatly to Bristol’s growing reputation as a centre of excellence in the sector. Her efforts, alongside other partners from across Bristol, helped ensure our success in attracting Channel 4 and she continues to help build what will be an important and fruitful relationship for the whole city.”

Addressing students at the official ceremony, Fiona said: “You are graduating at an amazing moment in Bristol’s creative journey, with business booming across the creative industries, Channel 4 arriving with commissioners in October, the Studios busy and booked until the end of 2020. There really has never been a better time to jump into the working world of TV & film, and if you choose to stay here in Bristol, an internationally recognised UNESCO City of Film, I think you’ll discover you’re in one of the best places to do so. I wish you all the very best of luck, and I thank UWE from the bottom of my heart for this honour.” 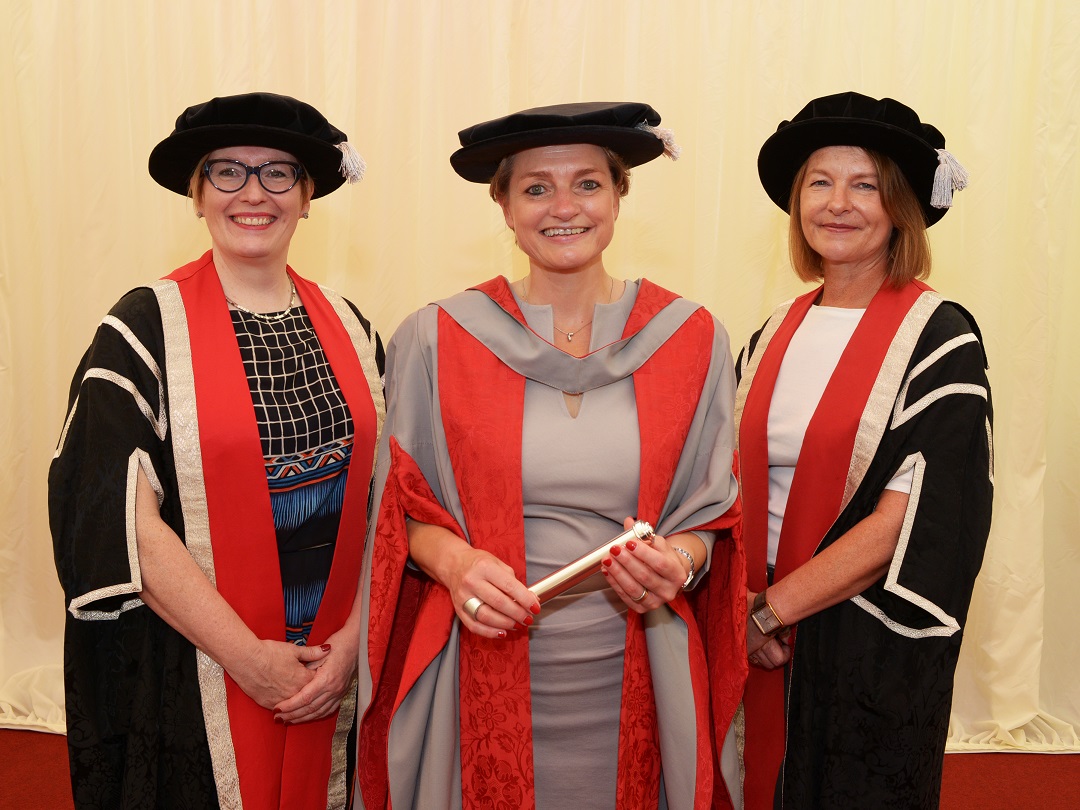 Fiona was instrumental in establishing The Bottle Yard Studios initiative on behalf of Bristol City Council and has led the development of the site since it opened in 2010. Over the past nine years, Fiona’s working knowledge of the production industry and longstanding commitment to championing the skills of regional crew have transformed The Bottle Yard from a set of disused warehouses into a bustling business hub which today brings a host of benefits to the region. Covering seven acres, or more than five football pitches, the Studios exist to bring money into the local economy, keep local crews working at home and raise Bristol’s profile across the world. More than 500 FTE jobs were generated on site in 2018, and the Studios contributed to an estimated £15 million inward investment spend into Bristol from filming-related activity.

Fiona is also deeply committed to providing equal and inclusive training and skills opportunities for the next generation of crew in Bristol. Working with further education provider Boomsatsuma she has established an on-site Film & TV Production Diploma that enables 16-19 year olds to earn a nationally recognised qualification (equivalent to three A-levels in UCAS points) whilst studying in a working studio environment. The course proactively seeks applicants from the South Bristol area. She is also working with UWE Bristol and City of Bristol College (COBC) to create further progression opportunities in the industry for South Bristol students, as part of a Memorandum of Understanding signed by the two establishments earlier this year, which set out plans for a joint University Centre at COBC’s Hengrove campus.

Fiona started out in theatre at Manchester Royal Exchange and the Royal Shakespeare Company before moving into television in 1990 when she joined the BBC’s Drama department in London. In 1993 she relocated to Bristol and worked for more than 14 years as a Location Manager and Line Producer for TV drama, before going on to manage Production Liaison for South West Screen and Creative England. Fiona sits on the Royal Television Society West committee and Clifton College Council. She is a member of the Bristol UNESCO City of Film steering group and the Mayor of Bristol’s Chanel 4 steering group.

Congratulations Fiona from all at The Bottle Yard!