A piece of original memorabilia from the filming of long-running BBC comedy series Only Fools and Horses, widely considered to be Britain’s best sitcom of all time, will be preserved for posterity thanks to the city of Bristol.

Del Boy’s red no 22 lock-up door was situated in the garage site at Duckmoor Road in Bedminster until May this year, when it was replaced as a result of refurbishment works to the site. Faced with the need to find a new home for the door, Bristol City Council turned to the team at The Bottle Yard Studios for help.

The Council-owned garages were built in 1962 at a similar time to the three high rise blocks nearby; Southbow House, Winterstoke House and Whitemead House. Whitemead House featured as a filming location in Only Fools and Horses, portraying the exterior of Del Boy’s Boy’s fictional Peckham high rise flats famously named ‘Nelson Mandela House’.

Emma Reid, Site Coordinator at The Bottle Yard Studios, says: “The door represents a small but fun slice of British TV history made here in Bristol and we wanted to make sure it would be preserved for the future. We put the word out to our industry contacts and were quickly contacted by specialist collector Scott Harrington who owns the Harrington Best of British Collection. When we found out about the other Only Fools and Horses items Scott had already collected, it seemed like the perfect home for it. We felt that the TV industry should benefit too, so we’re pleased to have arranged for Scott to make a generous donation to the Film & TV Charity (www.filmtvcharity.org.uk), an organisation which provided an important lifeline for many TV and film crew throughout the challenges of the pandemic.”

Scott Harrington of the Harrington Best of British Collection says: “My wife and I began collecting 20 years ago, picking up costumes and props from TV series at auction when it was still quite an unusual thing to do. The inspiration behind it was my Dad, a fun-loving, patriotic man who loved British TV. He was battling a brain tumour which required major surgery and a long period of treatment, and when we started bringing home bits and pieces for the collection, it always brought a big smile to his face. We continued collecting, focusing mainly on items from the 70’s through to the 90’s. Today the collection is bigger than ever! 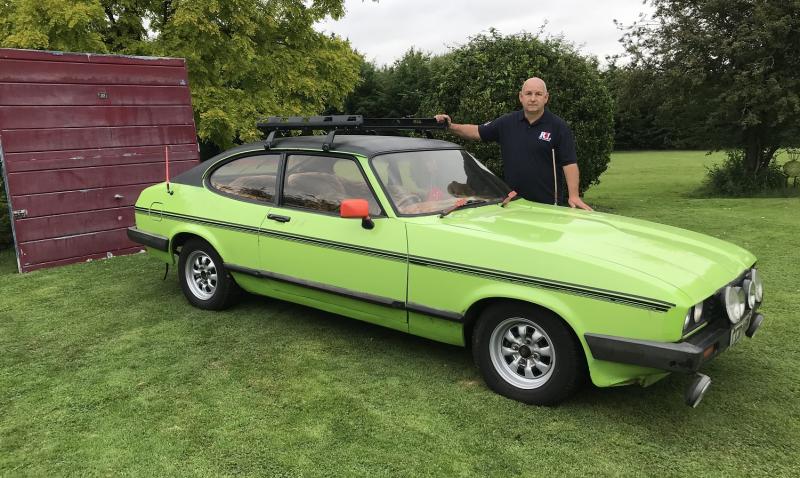 “We already own Del Boy’s yellow Reliant Regal three-wheeler van and his Ford Capri Ghia, or ‘The Pratmobile’ as Rodney calls it, as well as Trigger’s medal from the 1996 Christmas special ‘Heroes and Villains’. The Reliant Regal is currently on display at The British Motor Museum in Gaydon and we’re in discussions with the Museum to arrange for the door and Capri to join it in the future, so that the public can visit.”

Other items in the Harrington Best of British Collection include the Morris Minor belonging to Frank Spencer (played by Michael Crawford) that hangs off a cliff in ‘70’s comedy Some Mothers Do ‘Ave ‘Em, the guitar owned by Wolfie Smith (played by Robert Lyndsay) in ‘70’s sitcom Citizen Smith, the Fiat used in Peter Kay’s hit BBC One Car Share series (2015-18), the blue Citroen Saxo from Gavin & Stacey (2007-10), an original Mr Blobby suit and Mr Bean costume, Eddie the Eagle’s boots from his famous 1988 Olympic Ski jump and the ‘Phantom Flan Flinger’ costume from ‘70’s children’s series Tiswas. Also part of the collection are ‘Royal-used’ items including the Queen Mother’s Daimler limousine and hearse, and the Duke and Duchess of Cambridge’s state Jaguar and Range Rover.

Scott continues: “What started as a hobby has turned into a real passion for us and we regularly showcase our items free of charge for charitable events. Our long-term aim is to create our own family museum where people can take a trip down memory lane with us to celebrate key moments in our history represented by our memorabilia, to keep these moments alive. We’re currently in talks with the National Lottery Heritage Fund to try to make this happen!”

Other Bristol locations used during the filming of Only Fools and Horses between 1981 and 2003 include Welsh Back, Brunel Lock Road, Penn Street in Broadmead, Park Avenue in Bedminster and Backfields Lane in St Paul’s. Find out more about the scenes they were used for by visiting Bristol Film Office’s ‘TV Favourites’ Movie Map here.

Click here to watch classic Only Fools and Horses clip ‘Del Boy unveils the Pratmobile’, featuring the lock up door.

The Film & TV Charity works behind the scenes of the UK film, TV and cinema industry. It offers free and confidential advice and financial assistance in all kinds of situations, as well as practical and emotional support. Support is available 24/7 via phone (0800 054 0000), email info@filmtvcharity.org.ukor live webchat at www.filmtvcharity.org.uk.