Hellboy in UK cinemas 11 April after part-filming in Bristol

The highly anticipated third Hellboy movie is set to premiere in UK cinemas this Friday 11th April, after part-filming in Bristol in 2017.

The Bottle Yard Studios provided the UK production base, supplying offices, construction areas and prop stores. Night shoots for major scenes starring lead character Hellboy (David Harbour) took place in September 2017 at Waring House in Bristol’s Redcliffe area, which can be seen in the opening moments of the movie’s trailer. The demanding shoot featuring SWAT teams, firearms and armoured vehicles, was arranged with help from Bristol Film Office who assisted with location scouting, recces, arranging unit bases and parking. They also helped producers liaise with residents, advising on donations for the local community and ensuring translation needs were met so that communications were fully accessible. 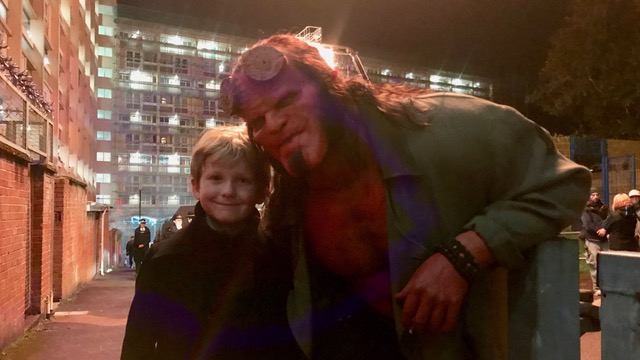 Hellboy’s Unit Production Manager (UK) Benjamin Greenacre says: “Hellboy was the fourth – and biggest – film that I’ve shot in my home city and Bristol never disappoints; it’s an exceptional place in which to make a movie. The city and its surroundings has every sort of filming location a director could want. The Bottle Yard is a Grade A facility, perfect for our production base and Bristol Film Office is second to none. There’s a terrifically strong talent base here which is growing every year. Access to this talent, to the excellent locations and to the Studios are huge incentives for productions to base themselves here in Bristol.”

“As ever it was a pleasure to work alongside the people of Bristol during the shoot,” says Benjamin, whose other recent credits include Fortitude (Sky Atlantic) and The Trial of Christine Keeler (BBC). “We filmed in Redcliffe for a couple of nights; the local residents could not have been more helpful and enthusiastic. Beyond Redcliffe, Hellboy were lucky enough to shoot at the fantastic Wells Cathedral, and at Grittleton House, a beautiful country house near Bath where the Sky series Agatha Raisin is often shot. Bristol continues to be a renowned centre of excellence for High End Television production – Hellboy puts Bristol on the US studio radar as a city in which to shoot big budget films too.”

Natalie Moore of Bristol Film Office says: “Hellboy was a hugely significant booking for Bristol. A shoot of this scale brings its own set of complex demands and requires the highest calibre of professionalism from many partners within the city to make it possible. We were able to cater for all the production’s needs, as well as supplying the all-important studio base, production offices and storage at The Bottle Yard. Our involvement in Hellboy enhances Bristol’s profile as a prime location for producers looking to make their next international blockbuster. Well done to everyone involved.”

Hellboy is back, and he’s on fire. From the pages of Mike Mignola’s seminal work, this action-packed story sees the legendary half-demon superhero (David Harbour, ‘Stranger Things’) called to the English countryside to battle a trio of rampaging giants. There he discovers The Blood Queen (Milla Jovovich), a resurrected ancient sorceress thirsting to avenge a past betrayal. Suddenly caught in a clash between the supernatural and the human, Hellboy is now hell-bent on stopping Nimue without triggering the end of the world.