Annual figures released today by Bristol Film Office show that despite an ‘expected’ dip in the value of inward investment generated by film and TV production in Bristol last year, caused by the three-month pause in filming brought on by COVID-19, the city’s filming levels bounced back quickly, with productions like Stephen Merchant’s The Outlaws contributing to a strong recovery.

Film and TV production was worth an estimated £12.6 million (£12,609,250)* in Bristol in 2020-21, a lower figure than the £17 million recorded in the previous financial year, but one that was “fully expected”, according to the city’s Senior Film Manager. 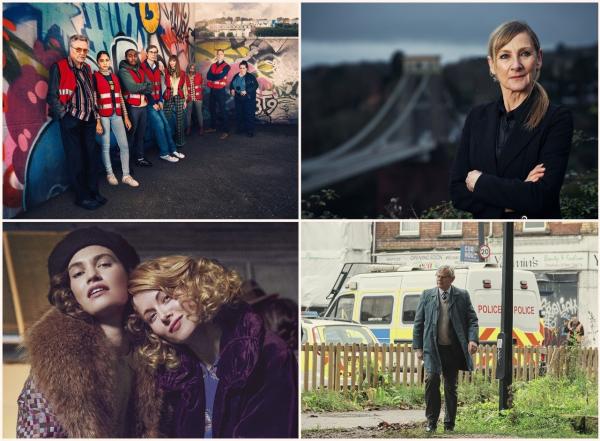 Senior Bristol Film Manager Laura Aviles, who oversees The Bottle Yard Studios and Bristol Film Office, says: “We fully expected to see a dip in Bristol TV and film production spend due to the pandemic forcing a pause in production between March and the end of June last year. What is heartening to see, is that once production resumed, Bristol went on to register similar quarterly levels of spend to previous years for the remainder of the financial year.

“This is clear evidence that the film and TV production bounced back incredibly quickly in Bristol, despite crew, companies and facilities having endured an incredibly uncertain and challenging period. The levels of production we’ve seen so far in the current financial year are exceptionally strong, and we forecast a healthy spend for 2021/22 that we hope will match, or even exceed pre-pandemic levels.”

Councillor Craig Cheney, Deputy Mayor and Cabinet member for Finance, Governance and Performance, said: “Film and TV production truly felt the effects of the COVID-19 pandemic, with its impacts reaching into the wider creative sector and the industry’s supply chains. These figures show that the industry is making a strong return with Bristol continuing to play a major role internationally in filming and production. “We are committed to supporting the industry through Bristol Film Office and The Bottle Yard Studios and are encouraging those who work in the sector to use our local businesses and talent pool to ensure it remains sustainable as it works towards a brighter future.”

The first production to commence filming on location in Bristol in Summer 2020, following the Government’s greenlight and implementation of safety guidelines for filming by leading industry bodies, was season two of War of the Worlds (Disney+) starring Gabriel Byrne and Daisy Edgar Jones. Period drama The Pursuit of Love (BBC One) starring Emily Mortimer and Lily James, series two of Andy’s Aquatic Adventures (CBeebies) and popular gameshow Tipping Point (ITV) were among the first titles to kick back into action at The Bottle Yard Studios.

The remainder of 2020 and the first quarter of 2021 saw a rapidly increasing flow of titles commence filming, including new comedy thriller The Outlaws (BBC/Amazon Studios) starring Stephen Merchant and Christopher Walken (beginning tonight on BBC One), upcoming sc-ifi thriller The Last Bus (Netflix) and upcoming period drama Becoming Elizabeth (STARZ), all of which filmed at the Studios and on location across Bristol with support from the city’s Film Office.

Bristol Film Office recorded a total of 653 filming days at Bristol locations and/or at The Bottle Yard Studios in 2020-21.