The second and final season of Starz Limited Series The Spanish Princess begins on STARZ and the STARZPLAY app this Sunday after filming at The Bottle Yard Studios and the surrounding region for six months in late 2019 / early 2020. 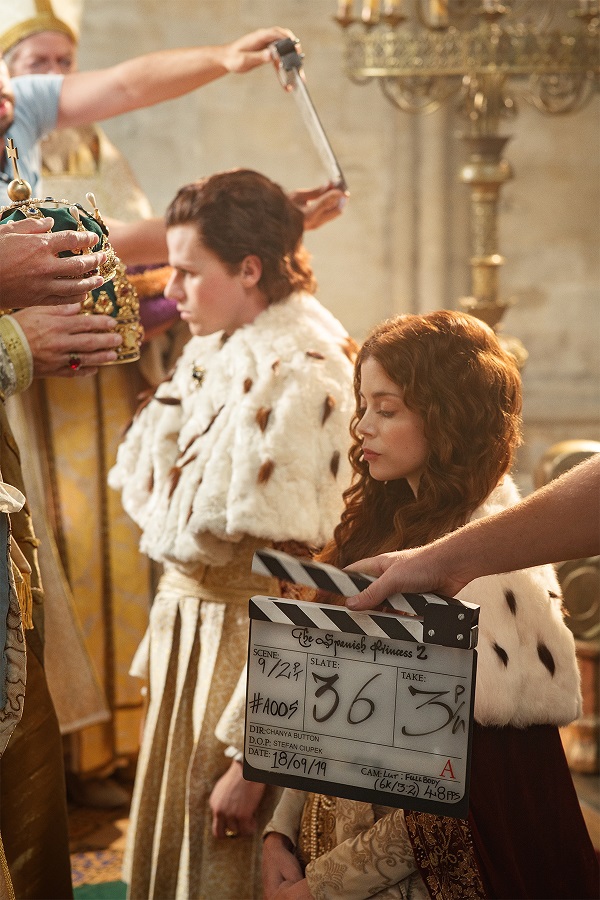 The eight-episode conclusion of the Tudor drama starring Charlotte Hope (Game of Thrones) and Ruairi O’Connor (Delicious) as Catherine of Aragon and Henry VIII, was fortunately able to complete filming at The Bottle Yard Studios in March, just days before the Covid-19 pandemic forced lockdown and a national pause in TV & film production.

Filming took place on the show’s full-scale, interconnected Tudor-era Westminster Palace sets which stand in 30,000 sq.ft. of The Bottle Yard’s Export Warehouse and Tank House 1. Production offices were also based at the Studios, as well as construction areas, stores and costume departments. Location filming took place at Bristol’s Ashton Court Estate, which hosted a royal pheasant hunting scene with support from Bristol Film Office, as well as historic locations in the region such as Kings Weston House, Montacute House, Wells and Gloucester Cathedrals and Berkeley Castle.

“We were delighted to return to Bristol and The Bottle Yard Studios for season two of The Spanish Princess.  In addition to offering so many wonderful choices for exterior filming, Bristol has proven
to be a very film-friendly town and the professionals at The Bottle Yard provide the kind of strong
infrastructure needed to keep a fast moving production on track,” said Karen Bailey, SVP of
Programming at Starz.

The Spanish Princess season two concludes the story of Queen Catherine and Henry VIII. Presiding over the most glamorous court in Europe and beloved by their people, together they create an England that is proud, confident and strong enough to withstand threat from abroad. Catherine’s struggle to produce an heir places her marriage and position in the court at risk, and she is haunted by her choices from the past. Despite proving herself a politician, a diplomat, a national inspiration and even a military commander, Catherine must battle to save her love with the King, and to preserve the peace and prosperity of their reign.

The Spanish Princess season two begins on Sunday 11 October on STARZ and via the STARZ PLAY app on Amazon Prime.