Series 4 of Poldark begins on BBC One this Sunday, after the hit Cornish saga filmed once again at The Bottle Yard Studios and across Bristol last year.

Producers Mammoth Screen have based production at The Bottle Yard Studios since Poldark’s first series filmed in 2014. This new eight-part series filmed across Cornwall, Bristol the West Country and London – with the entire production coordinated from the Studios between September 2017 and January 2018. This year more sets than ever before were built in our Tank House 1 and 2 and Studio 2. Construction, prop workshops and an extensive costume department were also situated on site.

Poldark Producer Michael Ray says: “As series four of Poldark has grown bigger than ever, with Poldark’s sights set on Westminster, we needed more space than ever and The Bottle Yard has it. In three studios, we have 18 sets, including five composite houses – Poldark in Cornwall and London, the Warleggans in Cornwall and London and the Whitworth Vicarage – and this year we were also able to build a period-correct scale replica of the House of Commons. We’re looking forward to what we can build next year!” 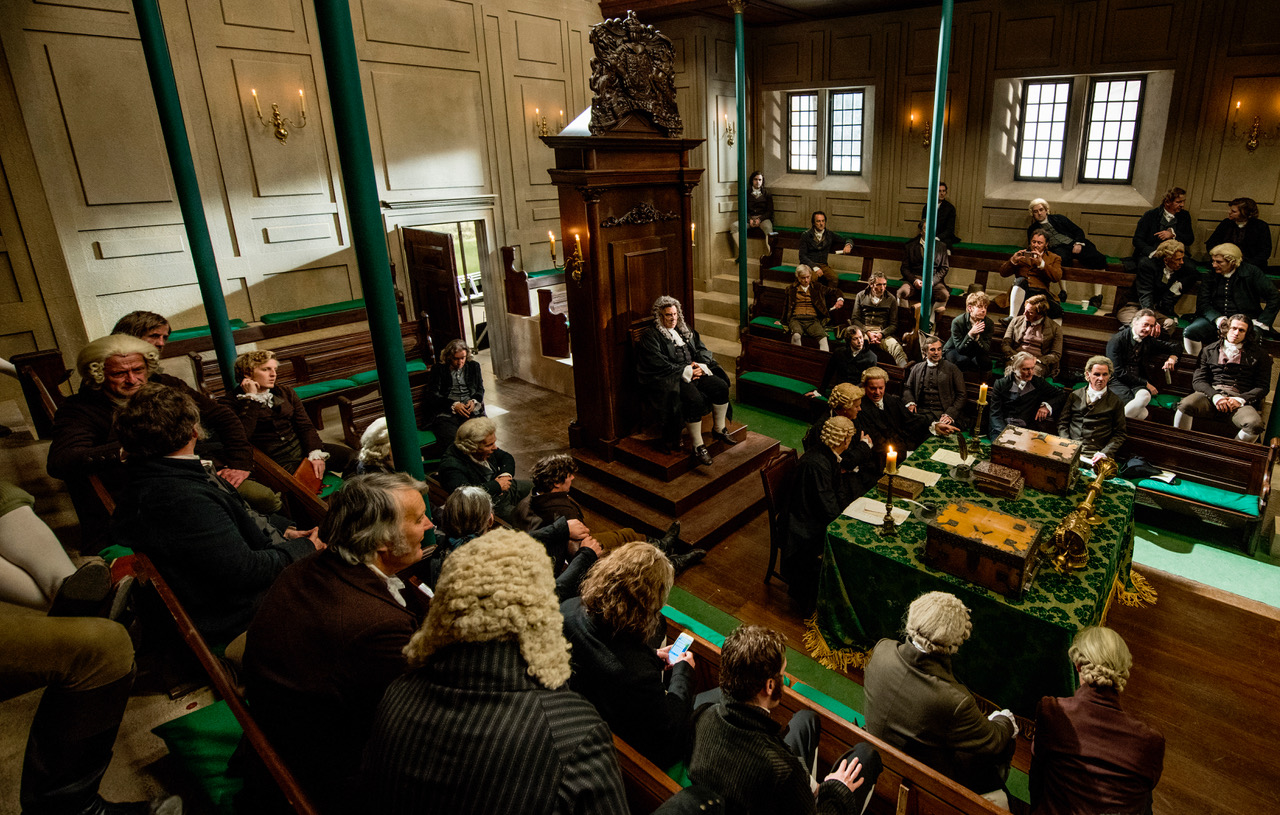 Fiona Francombe, Site Director of The Bottle Yard Studios, said: “The expansion of Poldark’s operation has made series 4 production a truly exciting period at The Bottle Yard. Mammoth have created such an impressive range of sets on site and it’s always a thrill to see them come to life on screen. With extra sets comes enhanced activity across the board – in production offices, costume, construction and workshops – and of course larger scale scenes like those set in the world of Parliament, involving more cast and extras. We have the space for all of it and the companies on site to support all stages of production, so it’s always a joy to help Mammoth realise their ambitions here.”

Poldark series 4 also shot across Bristol locations during December and January. With support from Bristol Film Office, filming took place at locations including All Saints Church, Colston Hall and Redcliffe Caves, which once again will double as the tin mines in the popular series, this time featuring an action flood sequence. Unit bases in the city were set up at Church Lodge and Lloyds Amphitheatre.

Bristol Film Office’s Natalie Moore says: “Bristol’s high calibre crew, versatile locations and studio facility play a major role in bringing Poldark to the screen and this year was no exception. We were able to assist with a number of locations and complex shooting requirements, including a dramatic flood action sequence beneath the city in the Redcliffe Caves, which I have no doubt will look particularly impressive on screen.”

Series 4 begins in 1796. Ross (Aidan Turner) must defend Cornwall from an empowered George Warleggan (Jack Farthing), and risks everything he holds dear as he embarks on a political journey which takes him to the nation’s capital. Demelza (Eleanor Tomlinson) finds her loyalties torn, Elizabeth (Heida Reed) tries to strengthen her marriage, Morwenna (Ellise Chappell) continues to be oppressed by husband Reverend Ossie Whitworth (Christian Brassington), and the Enyses (Luke Norris and Gabriella Wilde) are tested as never before.

Powerful new characters enter the saga, Rebecca Front (War and Peace, The Thick of It) is Lady Whitworth, Ossie’s formidable mother and Max Bennett (The Hollow Crown) is Monk Adderley, an unscrupulous society figure who is on a collision course with the Poldarks. Also back for series four are Harry Richardson and Tom York as Drake and Sam Carne, Beatie Edney as Prudie and Josh Whitehouse as Lieutenant Hugh Armitage, who remains deeply in love with Demelza.

Poldark is adapted by Debbie Horsfield (Age Before Beauty, Cutting It, The Riff Raff Element) from the novels by Winston Graham. It is produced by Michael Ray (Poldark) and directed by Joss Agnew (Mr Selfridge, Jekyll and Hyde) and Brian Kelly (The Loch, Outlander). Debbie Horsfield continues to serve as executive producer alongside Tom Mullens, Karen Thrussell and Damien Timmer for Mammoth Screen and Elizabeth Kilgarriff for the BBC.

Poldark returns on Sunday 10th June at 9pm on BBC One.