At a time when live sports have been put on pause due to the Covid-19 pandemic, our business tenants Loop Productions are working at the forefront of virtual sport broadcasting from their base here at The Bottle Yard.

The company, which specialises in live streaming and production, has devised a new streaming solution to enable the Professional Darts Corporation’s (PDC) new Home Tour Darts tournament, hailed in the UK and globally as the first event of its kind to bring live professional sport back into people’s homes during lockdown. 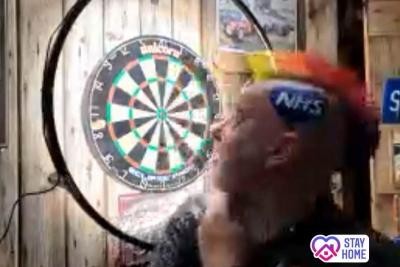 The 2020 Unibet PDC Home Tour streams elite level darts from the living rooms of the pros to fans worldwide through live video calls, and is the Corporation’s first ever home-staged event. Kicking off on 17 April, all PDC Tour Card Holders were given the opportunity to take part, with four players in action every night.

On the opening night, current PDC World Champion Peter ‘Snakebite’ Wright (pictured left) told the BBC: “It beats watching the news and all the horrible things going on around the world – so we’re going to have a bit of fun with darts.”

The nightly league format sees all four competitors play each other once in matches played over the best of nine legs, with a winner crowned each night. Following the conclusion of the 32 nights of league phase action, 32 group winners will advance to the second phase of the competition, beginning on 19 May.

Behind the scenes, a great deal of work goes into making the unique event happen. Loop’s Production Engineer Adam Young says; “It’s been a busy couple of weeks, which nobody would have predicted at the start of this crisis, but we’ve been working hard to fill the vacuum where normally we’d be producing a lot of sports content at this time of year.”

Players and pundits participate in the broadcast via their mobiles and laptops using video conferencing software, with the feeds taken into Loop Productions’ vision mixing hardware. For the players, it’s just a matter of simply pointing their cameras at the darts board in their living room, shed or hallway and connecting to the video conferencing call. The live coverage from each players’ camera is mixed with on-screen graphics and commentary by the live directors.

“We’re using two locations in Bristol to bring together all the video feeds that go into the live production of darts” says Young. “To comply with distancing regulations, our two live directors each have hardware vision mixers at their respective homes. Given that the event lasts 32 consecutive nights and is streamed and broadcasted around the globe, we needed to split workload between the team!”

The Loop Productions office at The Bottle Yard Studios acts as the hub for the live graphics. Working with third-party data providers SportRadar, Loop utilises the IT infrastructure at the studios to provide a secure connection to the SportRadar servers. A SportRadar operator takes part in the video conference remotely so they can keep up with the action with very little latency. Data from SportRadar is received at The Bottle Yard and passed on to the vision mixer back at their home gallery.

Young says: “We’ve thoroughly road-tested our workflow for the past three seasons on the PDC Pro Tour, but normally we are at the same venue. We wouldn’t normally choose to be reliant on the cameras, microphones and lighting equipment that sportspeople have in their houses, so a lot of quality control goes into ensuring the best outcome for all 128 players who are taking part in the PDC Home Tour.”

Two weeks in and the tournament is proving to be a major hit with fans. “So far, coverage has been delivered to broadcasters internationally including DAZN in the USA, Sky Sports in the UK and Fox Sports in Australia. We also deliver to the PDC’s dedicated online player ‘PDC.TV’ and to bookmaker websites around the world”, says Young.

And while lockdown forces broadcasters to seek new ways to produce content, Loop Productions is now receiving interest from other potential clients around the world. Young adds: “The tournament has been attracting attention from other top sporting bodies and we’re now in talks to produce coverage of new competitions. It seems darts is not the only sport which lends itself to being played in isolation!”

Loop Streaming and Productions Ltd has a team of five based at their Bottle Yard, coupled with regular freelancers across the country. Previously based in Clifton, the company moved to their new headquarters at the Studios last year, after a two-year period of rapid growth led them to seek larger premises.

The PDC Home Tour is broadcast live on PDCTV for free to all registered users, regardless of whether they have a paid or free membership. UK fans can also watch the action through the Sky Sports app.