Bristol is “a theatre of opportunity” says Chloe Producer, as thriller begins this Sunday on BBC One

The six-part drama made by Mam Tor Productions for BBC One and Amazon Studios set up headquarters at Bristol’s Bottle Yard Studios in Spring 2021, where sets were built for interiors including lead character Becky’s flat and a Bristol gallery location where key scenes take place. Production offices, prop stores, make up and costume departments were all based on site, and the Studios’ green screen was also used. 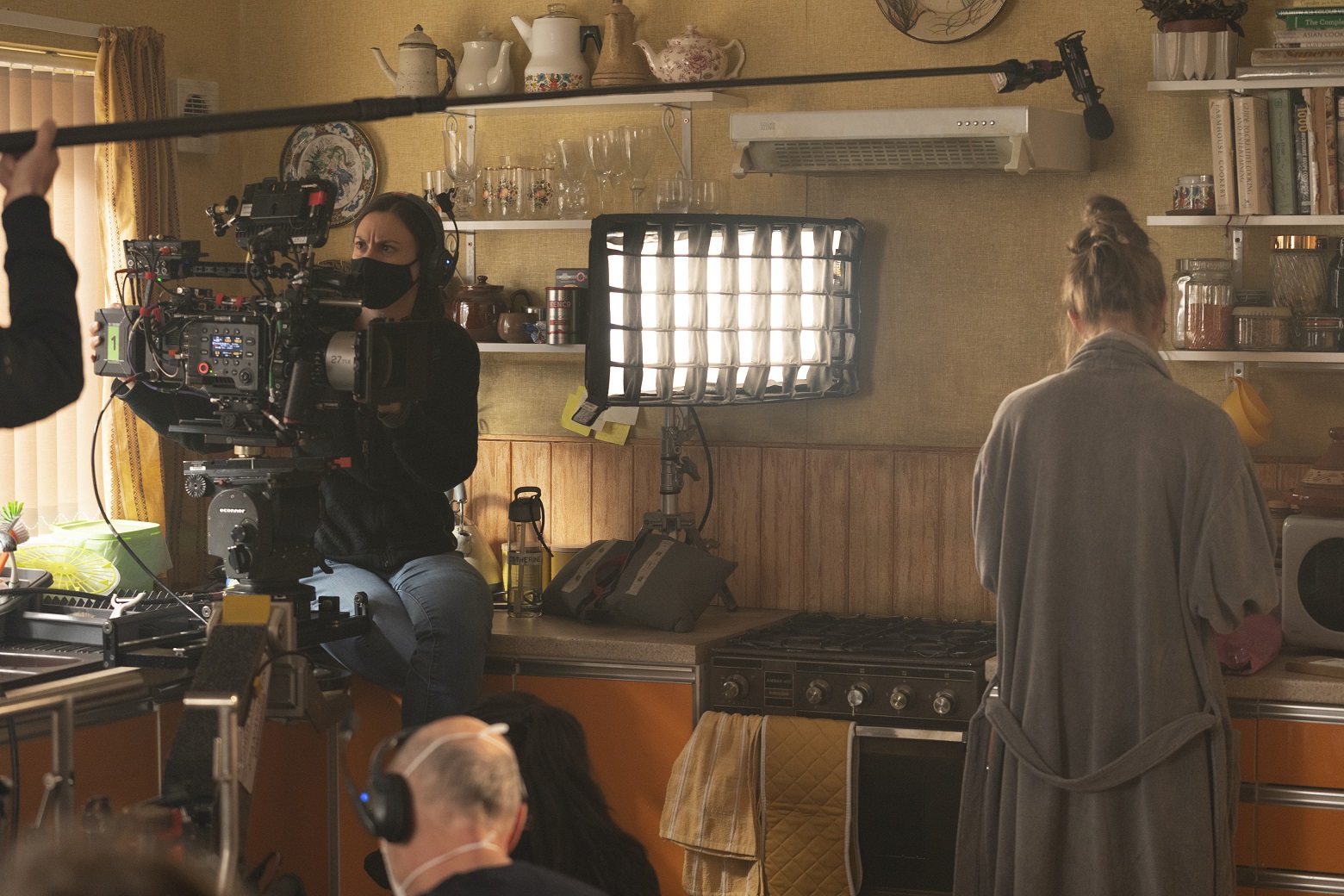 During the 15-week shoot, Bristol Film Office assisted filming at a number of locations in the city including A Bond Warehouse near Cumberland Basin (which provided the setting for a nightclub), M Shed on Princes Wharf, The Arches industrial estate in St Philips and Picton Street in Montpelier. Numerous other Bristol locations were also used, including the Bristol Marriot Royal Hotel on College Green, the exterior of St George’s Hall on Great George Street, Bristol Beacon, the Royal West Academy on Queen’s Road, The Forge in Colston Yard, Bar 44 in Clifton, Bristol’s harbourside, the Quay Street Diner and a private residence on Fernbank Road in Redland.

Joanna Crow, Producer of Chloe, comments: “Bristol is a city that carries Drama in its blood. The city is a theatre of opportunity with ready-made stages in its gorges, docks, colourful streets and vibrant harbourside, robustly supported by both the dynamic operation at The Bottle Yard Studios and the post facilities at The Farm.  ‘Chloe’ has an idiosyncratic yet distinctively Bristol/South-West look and sound, but it’s thrilling story of obsession and grief is universally relatable.”

Laura Aviles, Senior Bristol Film Manager says: “This is another important high end TV drama made and set in Bristol, with an intensely gripping, modern plot incorporating the timely theme of social media’s increasing prominence in our everyday lives. As is clear from the array of locations used in Bristol and the surrounding region, and the strong local crew-base that worked on the series, Mam Tor Productions found everything it needed on the doorstep of The Bottle Yard Studios, where it was able to base operations and build key interior sets. It was our pleasure to support the filming of Chloe in and around Bristol.”

Further afield in the region, filming took place at locations including Ston Easton Country Park in Somerset, Brean Down near Burnham on Sea, the Penny Brohn National Centre in Pill, Uphill near Weston-super-Mare, Walton Bay and a private property in Abbots Leigh.

Chloe follows Becky Green (Doherty), still living with her mum and working as a temp. Becky compares herself to the picture-perfect lives she sees on social media, compulsively returning to one account: Chloe’s (Poppy Gilbert). Chloe’s charmed life, adoring husband and circle of high-achieving friends are always just a click away. Becky can’t resist watching a life that contrasts so starkly with her own; a life spent caring for her mother, who has early-onset dementia, in their small seaside flat on the outskirts of Bristol. But when Chloe dies suddenly, Becky’s need to find out how and why leads her to assume a new identity and engineer a ‘chance’ meeting with Chloe’s best friend, Livia (Pippa Bennet-Warner) and infiltrate Chloe’s group of close-knit friends. Through her alter-ego Sasha, Becky becomes a powerful, transgressive heroine; a popular, well-connected ‘someone’ with a life, and loves, that are far more exciting and addictive than the ‘no-one’ she is as Becky. However, the pretence soon obscures and conflates reality, and Becky risks losing herself completely in the game she is playing.

Taking full advantage of Bristol’s rich cultural scene from the art to music, Chloe will also feature the work of artists local to the region, including an original score composed by Will Gregory (Goldfrapp) featuring Adrian Utley (Portishead) and original Artwork from Carl Melegari.

Chloe begins on Sunday 6th February at 9pm on BBC One and BBC iPlayer. It will be available to stream on Amazon Prime Video at a later date.