Ecosse Films’ six-part drama The Trial of Christine Keeler, which takes a fresh look at the 1960s ‘Profumo Affair’, will premiere on BBC One on Sunday 29th December, following its extensive shoot at The Bottle Yard Studios and a host of Bristol locations earlier this year.

Addressing cast, crew, Film Office and Bottle Yard staff and other local partners that supported filming at a recent private Bristol preview, Executive Producer Douglas Rae said: “What you have created here in Bristol is very special. To be able to produce a major drama with over 80 speaking parts and up to 500 people working on it, and to find everything you need in one city that you can get around so easily compared to London, is a remarkable thing. Bristol deserves a BAFTA for the best place to make drama.”

The highly anticipated drama starring Sophie Cookson, James Norton and Ellie Bamber filmed for 17 weeks in Bristol from Dec ’18 to Apr ‘19, with full production based at The Bottle Yard Studios which also accommodated purpose-built sets housed in 15,000 sq ft of space, including interiors of Wimpole Mews (Stephen Ward’s home) and Marylebone Police Station. 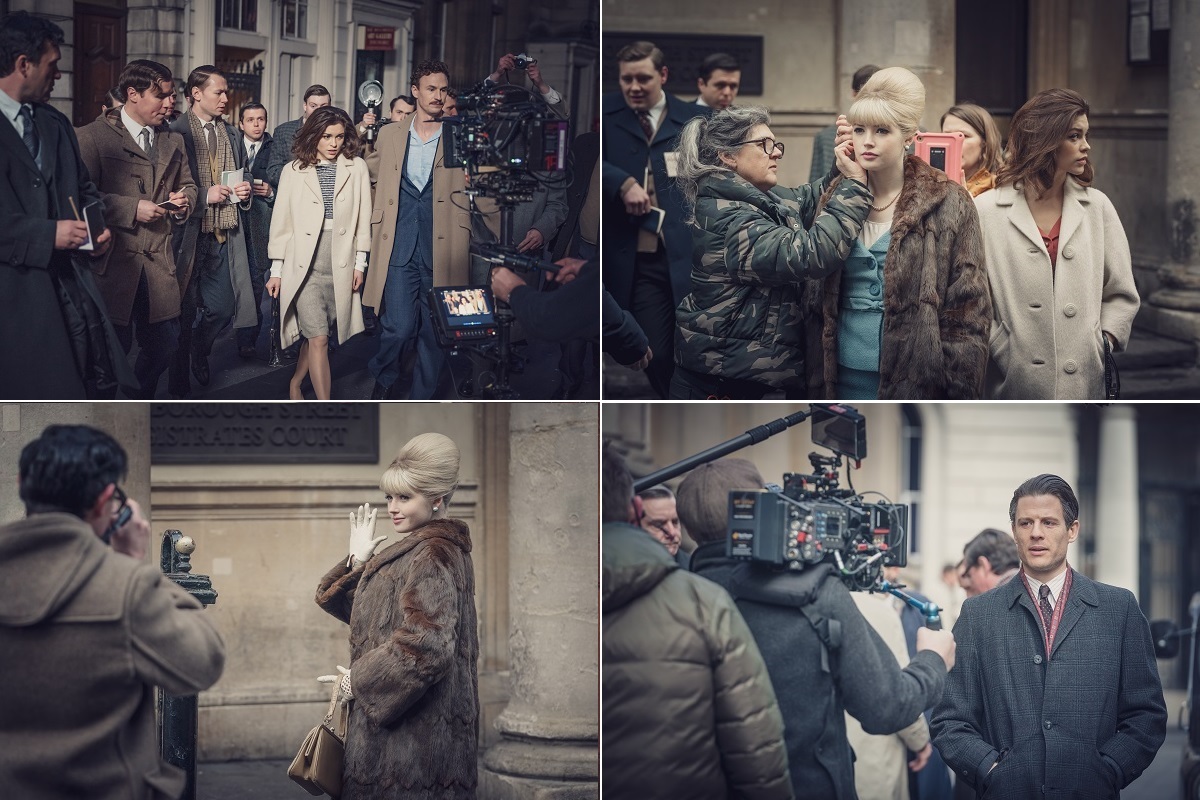 Kate Triggs, Executive Producer says: “It has been a delight to make The Trial of Christine Keeler in Bristol. The Bottle Yard has been a wonderful and supportive home and along with the Film Office, has helped to make Bristol a great place to film. The locations have also been inspiring for the whole team. And the icing on the cake has been access to the best and loveliest crew and HoD’s I’ve ever worked with.”

Fiona Francombe, Site Director of The Bottle Yard Studios says: “Ecosse Films was no stranger to Bristol having made three series of Mistresses here. Douglas [Rae] first came out to take a look around our Studios in 2017 and we were keen to have them back for a future project ever since. It was a great pleasure to welcome them to The Bottle Yard for the making of this iconic and intriguing political drama which I am certain will be the drama highlight of this year’s BBC festive schedule.”

Natalie Moore of Bristol Film Office says: “The Trial of Christine Keeler will feature the largest number of Bristol locations used in a single drama for years, which is fantastic to see. Productions like this are bringing a great deal of employment and investment into Bristol, more than £16 million last year. We worked closely with the production team and the many properties involved to make sure filming was a smooth process for everyone, including the public. When viewers come to watch this fascinating story unfold on screen, they’ll be seeing Bristol as London, and we’re proud to have played our part in that.”

Rachel Bowers of Bath Film Office said: “There aren’t many period court rooms left available for filming, so we were delighted to offer Bath’s Guildhall, to film the key Old Bailey scenes. Abbey Green was also used for a scene set in Notting Hill. We worked closely with the production to ensure they got the access they needed to these wonderful heritage locations, while also keeping what is a busy civic building open to the public.”

Sophie Cookson filming at The Guildhall in Bath which doubled for The Old Bailey (left) and in Bristol’s St Paul’s area which doubles for Notting Hill (© Ecosse Films / BBC, photo credit Ben Blackall)

At the centre of the storm was 19-year-old Christine Keeler (Cookson) – a young woman whom the powerful, male-dominated establishment sought to silence and exploit, but who refused to play by their rules. The Trial of Christine Keeler takes us behind the headlines to tell a human story about the sexual and cultural politics of one of the most revealing and iconic stories of modern times.

The Trial of Christine Keeler is an Ecosse Films and Great Meadow co-production for BBC One. Executive producers are writer Amanda Coe, Kate Triggs for Great Meadow Productions and Douglas Rae for Ecosse Films, plus Lucy Richer and Ayela Butt for BBC. The producer is Rebecca Ferguson. The series is commissioned by Charlotte Moore, Director of BBC Content, and Piers Wenger, Controller of BBC Drama.

The Trial of Christine Keeler begins on BBC One on Sunday 29th December. Episode two follows on Monday 30th December at 9pm. The remaining four episodes will transmit on Sunday nights at 9pm throughout January 2020.

For details on other shows made in Bristol and on screens this Xmas, plus what to look forward to in 2020, click here.