Production is underway at The Bottle Yard Studios on Andy’s Aquatic Adventures, the brand new instalment of the BAFTA-nominated Andy’s Adventures brand for Cbeebies, produced by BBC Studios and The Natural History Unit’s children’s department. 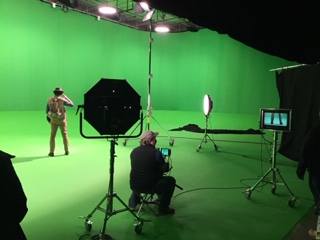 Producer Mark Jones says: “The Bottle Yard’s green screen is the perfect fit for our production. The sheer size of it complements the epic landscapes we composite onto it from BBC Natural History Unit’s archive. As there is an aquatic theme to this series, we plan to construct a green screen pool, bringing to life the archive of animals that live in our oceans.”

This new series sees Andy jetting off around the world and meeting animals living in, or near, coastal habitats, rivers, lakes, even underwater. His mission as always, to witness events in the natural world that help him solve a problem back at Safari World, the mythical park where he works with his boss Mr Hammond and tech wizard Jen. Stunning VFX and CGI coupled with Andy’s ability to shrink down to the size of any animal, blend him seamlessly into the action, getting him closer than ever to the creatures that inhabit our planet, resulting in the perfect introduction to wildlife for a pre-school audience.

Fiona Francombe, Site Director of The Bottle Yard Studios, said: “It’s always a pleasure to welcome Andy and the team back. This series sees our green screen studio used in yet more inventive ways; the creativity of the director and crew with each new theme is outstanding. This is the third instalment we’ve hosted since first building our green screen for Andy’s Prehistoric Adventures in 2015. It’s great to continue our relationship for another edition.”

Andy’s Aquatic Adventures is a co-commission from CBeebies in the UK and BBC Sales & Distribution for the international CBeebies channels. It is a continuation of the highly popular strand which has produced 125 episodes since its conception in 2010, comprising Andy’s Wild Adventures, the BAFTA nominated Andy’s Dinosaur Adventures and Andy’s Prehistoric Adventures, and Andy’s Safari Adventures (showing now on CBeebies), which is nominated for Best Children’s Series at the forthcoming RTS West of England Awards on 24th March.

Andy’s Safari Adventures is showing now on CBeebies, weekdays at 4.10pm or watch via the iPlayer.