Productions made at The Bottle Yard and across Bristol will light up TV screens this festive season.

Premiering on BBC Four on 29 December at 9pm, Eric, Ernie & Me (pictured above) celebrates Eddie Braben, the comedy scriptwriter behind the success of Morecambe and Wise. The one hour drama made by Objective Fiction explores the relationship between Morecambe, Wise and Braben, who became known as The Golden Triangle.

For over a decade, Braben penned Morecambe and Wise’s material, and reshaped the double act into the Eric and Ernie that the nation took to its heart. But it wasn’t all sunshine. The film culminates in the pair’s iconic 1977 Christmas Show, whilst showing the pressure and pain Braben went through to help create the screen work of Britain’s most beloved double act.

Trollied’s Christmas special will air on Christmas Eve at 9.30pm on Sky 1, and fans of the channel’s longest-running comedy are in for a treat as the one hour special will be followed by a brand new eight part series, beginning on Tuesday 2nd January at 10pm. 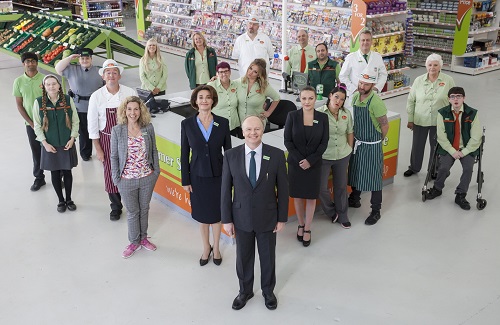 The new series picks up with store manager Gavin (Jason Watkins) delighted as the cash tills ring on another busy Christmas Eve at Valco. But as the festivities kick off, a team of low level criminals headed up by none other than Valco’s new star employee Tim (John Thomson) have their sights set on the takings, holding the staff in the canteen, leaving it to Gavin to raise the alarm and save the day.

Filming took place on the full-scale ‘Valco’ supermarket set at The Bottle Yard over nine weeks in the summer. The much-loved sitcom, produced by Roughcut TV, has been entertaining audiences since it began in 2011 with a total of seven series and four Christmas specials made at the Studios to date.

And if you missed The Crystal Maze Christmas Celebrity Special – don’t worry you can catch it on 4oD now. First shown on Wednesday 14 December on Channel 4, the special programme in aid of Stand Up To Cancer sees Richard Ayoade guide Ellie Simmonds, Nicola Adams, Ollie Locke, Mollie King and Tom Davis around the mighty maze. The show was filmed earlier this year in the purpose-built maze spanning over 30,000 square feet of The Bottle Yard Studios, created by original Crystal Maze designer James Dillon.

Bristol can even be found in the ad breaks – with the MacDonalds Christmas advert made on Bristol’s Park Street in late October, assisted by Bristol Film Office.