BBC Four’s ERIC, ERNIE & ME films at The Bottle Yard and across Bristol

A new BBC Four programme which celebrates Eddie Braben, the comedy scriptwriter behind the success of Morecambe and Wise, is filming at The Bottle Yard Studios and on location across Bristol from this week onwards.

Eric, Ernie & Me is written by Neil Forsyth (Bob Servant, Waiting for Andre) and produced by Objective Fiction. It explores the relationship between Morecambe, Wise and Braben, who became known as The Golden Triangle. For over a decade, Braben penned Morecambe and Wise’s material, and reshaped the double act into the Eric and Ernie that the nation took to its heart. But it wasn’t all sunshine. This one-hour film celebrates Braben as the man behind Morecambe and Wise’s greatest successes, culminating in their iconic 1977 Christmas Show, whilst showing the pressure and pain he went through to help create the screen work of Britain’s most beloved double act.

Producer Alison Sterling says: “The presence of the Bottle Yard as a filming resource in Bristol has been an enormous boon to the local film industry. There is a thriving network of really high-quality crew in the region which is helping us in the making of Eric Ernie and Me. Nearly all our crew and equipment are based in the Bristol region and we are delighted also to be able to use locations in the communities of Filwood, Brislington and St Anne’s. All the local residents have been exceptionally welcoming.”

Natalie Moore of Bristol Film Office says: “What could be more intriguing than a look at the relationship behind the success of the nation’s favourite double act? We’ve helped line up a variety of locations for this shoot and it’s fantastic to see the many sides of Bristol, from residential Knowle West to the iconic Colston Hall, portraying a 60’s and 70’s period British setting for a story about one of the most popular comedy duos of all time.” 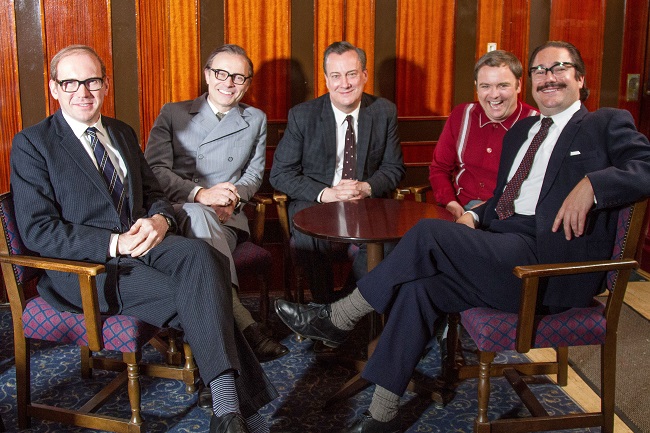 Fiona Francombe of The Bottle Yard Studios said: “We’re very excited to host this excellent new BBC Four film, featuring such a strong cast headed up by the talented Stephen

[Tompkinson] – great to have him back on site after he filmed Trollied here previously. We’re equally pleased to see Alison return to the Studios after she produced Katarzyna Klimkiewicz’s Flying Blind here in 2012 and line produced Claire Downes’ We Can Be Heroes here last year. It’s always a joy to see cast and crew returning to work on new projects that can benefit from strong support provided by the our city’s Film Office for location filming.”