The Girl Before (BBC One/HBO Max) 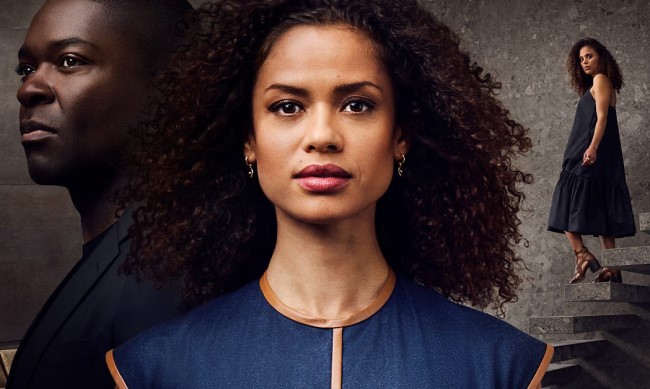 Four-part thriller starring Gugu Mbatha-Raw, David Oyelowo, Jessica Plummer and Ben Hardy, adapted by British author JP Delaney from his 2016 globally bestselling novel.  A young woman gets the chance to move into a beautiful, ultra-minimalist house designed by an enigmatic architect. There’s just one catch: the occupants must abide by his list of exacting rules.

At The Bottle Yard, Production Designer Jon Henson drew on minimalist Japanese architecture to create the set for One Folgate Street, the drama’s main location which Delaney describes as the drama’s “fourth character.”. Interior furnishings, including the sofa, dining table and cantilevered stairs, were also built by the production team. Henson built rain bars into the main courtyard from which water could pour down to make it appear as if it was raining, placing an extraction tank underneath stones in the central courtyard, allowing water to be drained and pumped out. Read more in Henson’s interview with Dezeen.

An exterior façade for the fictional one bedroom house, featuring lattice timber detail, was built at the end of Woodland Terrace off Hampton Road in Redland, Bristol. The city’s Film Office assisted with this and other location filming during April and May 2021, which took place in the Georgian surrounds of Queen Square, the Corn Exchange offices above St Nicholas’s market, at the University of Bristol’s Badock Hall and Stoke Bishop Estate.

Rhonda Smith, Producer, comments: “The Girl Before required a build space with dimensions that would allow us to construct a two-storey house, which was quite a challenge to find. The Film Office and Bottle Yard Studios stepped in at the twelfth hour and helped facilitate the shoot to run smoothly, both in the studio and at our various Bristol locations, in challenging times.”